Glyphosate (Figure 1), N-(phosphonomethyl) glycine [H2O3P–CH2–NH–CH2–COOH.  CAS number 1071-83-6], is a systemic, broad-spectrum, nonselective herbicide used to kill broad-leaved grasses and sedge species.  Peixoto [1] reports that it is one of the most used xenobiotics in modern agriculture.  Petit et al. [2] stated that it is completely degraded by microorganisms in soil, with a half-life of 60 days, primarily to nontoxic aminomethylphosphoric acid ([H2O3P–CH2–NH2]), which is further degraded in soil.  Glyphosate decomposition occurs under both aerobic and anaerobic conditions.  It is also inactivated by adsorption to clay in benthic or suspended sediment.

Figure 1: the chemical structure of glyphosate (from the Sigma Aldrich website where safety documentation can be found)

In the context of flax fibres as the reinforcement for composites, glyphosate herbicide (desiccant) is used where stand retting is adopted followed by direct combine-harvesting of the crops.  Preharvest retting of flax with glyphosate applied at the mid-point of flowering depends on uniform desiccation of the entire stem and is difficult to achieve during a dry season [3]. In Northern Ireland, the dessicant is typically applied around mid-July.

Eriksson et al. [4] proposed a scientifically justifiable list of “selected storm water priority pollutants (SSPP)” to be used, for example, in evaluating the chemical risks posed by different water handling strategies.  Glyphosate was included with the selected herbicides as it is extensively used in urban areas and along motorways in the United Kingdom, France, Denmark, and Sweden.  They considered 15 routes for the removal of glyphosate from storm water and predicted that infiltration basins were best management practice, followed by subsurface flow constricted wetlands and porous pavements.  Glyphosate is most readily removed by adsorption and microbial degradation.  Settlement tanks were judged to be the least efficient technique for the removal of glyphosate.

Everett [5] reported that pesticide regulators in north America were refusing to release key industry studies on glyphosate herbicide, that underpin regulatory authorisations and safety limits, to the public.  Many pesticides, including glyphosate, which are in common use today to underpin modern agriculture were permitted after relatively simple toxicity tests in the 1980s (or even earlier), without any knowledge of bioaccumulation in the environment or long-term chronic impacts on either wildlife or people.  The evidence for such impacts may not become available until the chemicals have been in widespread use for some time.  Important questions arise around the sustainability of chemically fomulated pesticides used across entire landscapes.  Modern farming practices need to be reviewed.  Many pesticides have already been banned, because they were shown to harm people and non-targeted wildlife.  Others, currently in widespread use, may be onerdue for review.

The overuse of glyphosate has now been flashing warning lights for some time [5].  Although it is the most used, and useful, herbicide in the world, there is increasing evidence to suggest that it is not the harmless substance which its makers claim.   The herbicde can accumulate in human breast milk at levels up to 1,600 times those permitted in EU drinking water. A 2014 report found an 18-fold increase in glyphosate concentations in air and water samples in Mississippi between 1995 and 2007.   It has been banned in El Salvador and Sri Lanka because studies linked the herbicide to an increase in a kidney disease implicated in killing thousands of agricultural workers.

Representative examples of commercially available formulated glyphosates are listed in Table 1 [6] with more information on the declared active ingredients available in the source reference.

The commercial herbicide Roundup® is a formulation of 36% glyphosate (normally considered the active ingredient) as the isopropylamine salt with a surfactant, polyoxyethyleneamine (POEA) [7].  Martinez and Brown [8] found that just one-third of the amount of Roundup® relative to glyphosate alone was required to kill rats suggesting that ingredients labeled as “inert” should be considered otherwise.  Peixoto [1] clearly demonstrated the ability of Roundup® to impair mitochondrial bioenergetic reactions, especially at higher concentrations, while glyphosate alone did not affect mitochondrial respiration and membrane energisation.  They attribute the effect to nonspecific membrane permeabilisation probably as a result of other ingredients (suspecting the POEA surfactant) or a synergy between components of the formulation.

Defarge et al [6] report that glyphosate alone induced neither inhibition of mitochondrial respiration nor disruption of the cell membrane at the levels tested, in contrast to the corresponding formulations.  They further state that:

Defarge et al [6] "concluded that ethoxylated co-formulants are the ingredients responsible for human cell toxicity".  Their results, in combination with an earlier compilation by Mesnage et al. [9], show that the distinction between “active ingredient” and “inert compound” is a regulatory assertion with no toxicological ground.

Sandermann [10] reported that the 1997 Heap review [11] listed 183 herbicide-resistant biotypes in 42 countries, including the first observation of glyphosate resistance (plants that survive and set seed).  By 2004, 11 weed biotypes had been recorded as glyphosate resistant.  The risk assessment for herbicide-resistant transgenic plants, notably Roundup-Ready® crops (e.g., alfalfa, canola, cotton, maize, and soybean), may well underestimate the long-term effects of dependence on glyphosate as a herbicide.

Pesticide use is only one reason why the present intensification trajectory is unsustainable [5].   The majority of the farming industry in developed countries (and increasingly in less-developed ones) has regrettably turned to intensive farming methods using agrochemicals with high embodied energy.  Further the concentration of activities in ever larger farms and corporations, with disproportionate influence on governments that can only see an economic future in continued growth of the economy, is not in the best interests of the only planet available to the human population.  It has recently been reported that 70% of the world's food is produced from small farms occupying just 25% of agricultural land: often these smallholdings have women as the major food-producers [12].  Agricultural intensification appears to be working against declared goals for slowing, stopping or reversing loss of biodiversity. 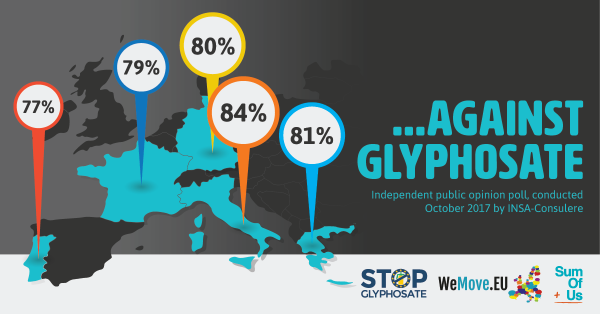 Image from David Norton/SumOfUs e-mail of Thursday 30 November 2017.
Created by John Summerscales on 12 March 2016 and updated on 13-Aug-2018 11:20. Terms and conditions. Errors and omissions. Corrections.