First, a couple of definitions: 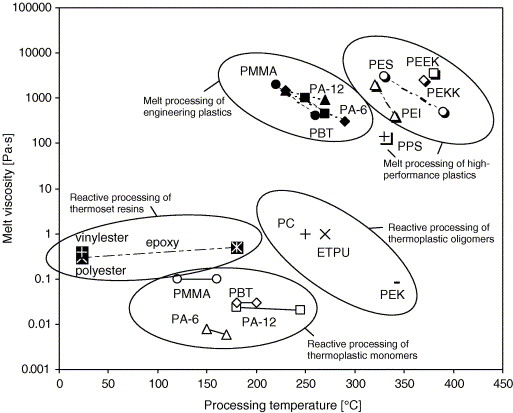 Effect of temperature on viscosity

Second, as the temperature rises it causes increased motion of the atoms in a polymer chain and thus the polymer becomes more fluid.  For a thermoplastic polymer, there is a direct and reversible relationship between temperature and viscosity (assuming no change in the molecular weight of the polymer due to further polymerisation or to degradation).  For the individual components in a thermosetting resin there should also be a similar reversible relationship between temperature and viscosity, but this will not be true for the mixed materials.  A typical relationship for the variation of viscosity with temperature would be:

where η and T are the instantaneous viscosity and temperature respectively and ηo is the viscosity at temperature To.  For a polyester resin, a typical value of a would be -0.04ºC-1 which would result in:

Effect of cure on viscosity

Third, most thermosetting resins start out as a mixture of two low viscosity components which react with one another to form a 3-D cross-linked network.  In consequence, the degree-of-cure and the viscosity increase with time after the mixing of the components. This is normally accompanied by the generation of heat which will act to accelerate the reaction.  In the limit, this may result in smoke and/or fire.

The heat evolved during cross-linking (cure) can be assumed to be proportional to the degree-of-cure of the resin system with the equation to describe the reaction rate having the form: δα/δt = K(1-α)n where K is based upon the Arrhenius equation: K = Ko.exp(-Ea/RT) and where:

For resin systems cured by an addition reaction (e.g. polyester and vinyl ester systems), the Kamal and Sourour [13] model is often used.  It incorporates both n-th order kinetics and an auto-catalytic term (Equation 2 [14]).

For epoxy resin, White [15] modelled the PR286 resin system with the following assumptions:

White further demonstrated that the profiles of the isothermal viscosity-time curves of an epoxy resin system were identical when plotted on logarithmic axes.  The effect of temperature was a change in the position of the curve with respect to those axes.  The application of an appropriate shift along the logarithmic time and logarithmic viscosity axes could bring any pair of curves into coincidence.  By implication, it follows that any isothermal viscosity-time curve may be generated from any other by an appropriate scaling of the time and viscosity axes.

Roller [16] presented experimental evidence for the applicability of Equation 4 for the determination of the viscosity of curing B-staged epoxy resins as a function of both time and temperature.

The following books, where identified by [name], were suggested by contributors to the Biomimetics JISCmail discussion list: Return to MATS 347 home page Created by John Summerscales on 02 February 2006 and updated on 27-Apr-2020 13:29. Terms and conditions. Errors and omissions. Corrections.