Summerscales [1-3], Burt and Smith [4], Karbhari [5], Fahr [6], Ibrahim [7] and Wang et al [8] have reviewed the use of non-destructive evaluation/examination (NDE) or NDT for fibre-reinforced composite materials/structures.  The applications of NDE/NDT can be considered to fulfil three functions (Table 1):

Table 1:  The functions of NDT

The various techniques can be arranged under three categories and further sub-divided by operating frequency albeit that some overlap may occur (Figure 1):

In the list which follows, references are provided for recent books or review articles pertinent to each topic.  Working from high frequency/short wavelength, the various techniques in each of the three categories are:

Table 2: Dielectric constants for glass fibre/polyimide composites and the constituents at THz frequencies [41]

Table 3: The wave numbers and wavelengths of the three infrared bands

Figure 2: Two photographs of the progress of the meeting flow front from two injection ports located at the centres of the left and lower edges in Resin Transfer Moulding (left).
The top right corner is outside of the moulded plate.  The corresponding C-scan of the cured plate (right: black is most attenuated, white is least attenuated ultrasound).

Summerscales [1] presented a preliminary assessment of the capabilities of the various NDT techniques for the detection of a variety of composites issues in the Table below where green indicates an established technology and orange indicates a technique with limited applicability or potential for development: 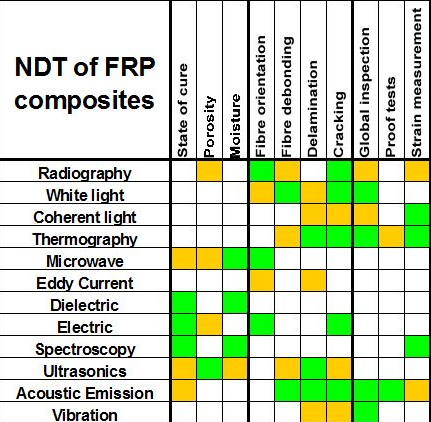 Baker et al [82] have similarly summarised the advantages and disadvantages of conventional NDI techniques in Table 1 (only accessible with a journal subscrption) of their paper.

Leavey et al [83] have presented an introductory tutorial on the use of wavelet analysis for signal processing in this context.  Yella et al [84] have recently reviewed the use of artificial intelligence techniques for the automatic interpretation of data from NDT.  Addin et al [85] have reviewed the use of neural networks in the prediction and detection of failures in laminated composite materials, with specific reference to NDT by vibration mode and frequency, use of Lamb waves and electrical conductivity.  Gros [86, 87] has reviewed the use of data fusion for handling multiple data sources in NDT.

Backman [88, 89] has considered how safety methods can be made available to the engineering community without requiring huge statistical databases for use in reliability analysis.  The book considers the probability of safe flight, and is thus perhaps essential reading for those involved in aerospace structural design, although much of the analysis is undertaken at the level of orders of magnitude rather than in fine detail.  Of particular relevance here is the consideration of probability of detection against damage size for various regions [Figure 3] and the ability of each non-destructive testing technique relative to the respective damage sizes.  Wall et al [90] have considered probability of detection (POD) data in industrial applications and suggest that could be benefits from the use of simple POD generator models validated against experimental data with a more structured and standardised approach to the use and correction of POD data (using expert judgement, modelling and signal-based methods).

Figure 3: Probability of Detection (POD) against damage size (after Backman [88]).

The various NDT techniques have an important role to play in both Condition Monitoring (CM) and Structural Health Monitoring (SHM) which are covered in a lecture delivered to both module MECH512 Design for Structural Integrity and MECH 513 Smart Materials and Intelligent Structural Systems.

Return to MATS 347 home page Updated by John Summerscales on 10-May-2022 16:33. Terms and conditions. Errors and omissions. Corrections.