Strain is normally measured using electrical resistance strain gauges adhered to the sample surface.  Gauges are available in a variety of lengths and usually 120- or 350-Ω: the latter are best suited to composites [1]. 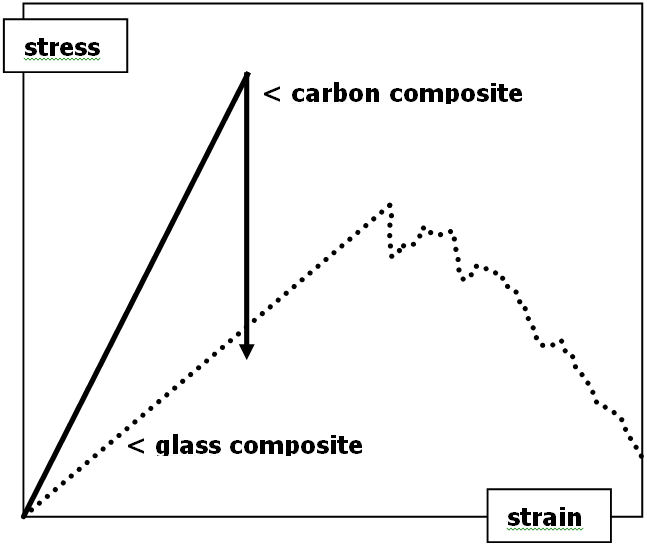 We can then define the material by a number of elastic properties:

For the purposes of this brief introduction, assume that the composite is homogeneous (single phase) and orthotropic (different properties on each orthogonal axis) unless specifically stated otherwise.  Where there is a laminate stacking sequence in the composite, more consideration should be given to the heterogeneous nature of the material especially if the material is in bending.  For the orthotropic case, there are 3 orthogonal values for each of E, G, ν and a single value for K with the respective equations for G [2] and K [3] being:

The parameters which characterise the failure are:

and while the value will be the same in all directions for isotropic materials (subject to some degree of statistical variation), it is necessary to specify the test axis for orthotropic materials.

International/national/industry standards exist for methods to determine the properties of composite materials [4].  The UK aerospace industry Composites Research Advisory Group has published a set of CRAG Test Methods [5], many of which have been adopted under the ISO banner.  Before testing, the material should be conditioned [6-8] and characterised for fibre, resin, void and moisture contents [9-12].  It is important to observe the failure modes after testing as this can give clues to the major weaknesses in the combined materials.  The principal forms of failure are matrix cracking, fibre/matrix debonding, inter-layer delamination, fibre fracture and fibre pull-out.  Typical images of failures (fractographs) can be found in Bascom and Gweon [13].

Perhaps the best indication of the properties of a material is obtained from a tensile test in which a specimen with parallel sides is caused to extend.   It is usually necessary to add end-tabs (often aluminium or glassfibre) to prevent crushing damage in the grips of the testing machine and to introduce the load into the specimen with minimal stress concentrations [19-21].

The compression test is essentially similar to the tension test except that the force is in the opposite sense (i.e. push instead of pull).  An additional complication arises because of a further failure mode: for slender specimens buckling may occur.  Most standard test techniques employ some form of anti-buckling guide to suppress this failure.

If a beam is supported at the ends and the middle is then forced downwards, there will be a gradual change from maximum compression stress at the upper surface to maximum tensile stress at the lower surface.   The shear stresses will be minimum at the surface and maximum on the neutral axis (this axis is normally the centre-line between the two surfaces).   Where a beam is tested in three-point loading, there will be significant shear forces throughout the beam except at very high span/depth ratios.   In four-point bending, the region between the central rollers will be in pure bending with shear outboard of the rollers.   The optimum configuration for the determination of flexural modulus would be four-point bending with the deflection of the central section referenced to the loading rollers.   An alternative is strain gauges in this position.

In pure shear, the plane is subjected to tensile forces on one axis and compressive forces of equal magnitude on the orthogonal axis.  In simple shear loading, two parallel faces move in opposite parallel directions.  Many different techniques have been proposed for the determination of the in-plane and through-plane shear properties with variations appropriate to composite plates, rods and tubes [27]. 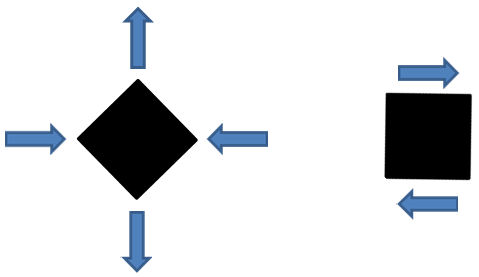 Figure 2:  In pure shear, there is simultaneous longitudinal tension and transverse compression of equal magnitude (left)
while in simple shear, two parallel faces move in opposite directions (right)

The inter-laminar shear strength (ILSS) test is a three-point bend test at very small span/depth ratio (typically 4/1 or 5/1).  This parameter should not be used for design purposes.  The test is often used to monitor the quality of the laminate: it normally measures the strength of the fibre/resin interface or of the resin rich area between the laminae.  The value for a good composite may be around 50 MPa.

Creep is the time-dependent deformation of a material under a sustained load.  It is normal to design the composite to avoid such deformation by:

Fatigue is the time-dependent deformation of a material under a cyclic load.  It is normal to undertake fatigue testing with a specific waveform (especially sine wave) or with pre-recorded deformations from a practical situation.  In general, fatigue testing is undertaken from a small to a large percentage (e.g. 10-60%) of the ultimate (failure) load for the mode of testing.  This usually avoids the complex gripping arrangements that are necessary for reversed cycle (tension and compression) loading.

For metals (which have a uniform microstructure) it is appropriate to use a pendulum impact machine (Charpy/Izod) to determine impact strengths and toughness.   However, in composites the crack often turns and runs parallel to the fibres until it finds a specimen edge.  In such a situation, the machine will under-record the strengths.  For composites, the preferred methods are drop-weight impact or ballistics using a larger sample such that the failure does not extend to the specimen edge.

For the prediction of the suitability of a material over the complete lifetime of components, it would be useful to conduct Highly Accelerated Life Testing (HALT).  Degradation mechanisms normally occur faster at higher temperatures, but if there is a change in the mechanism involved, then the data obtained may be misleading.  ASTM D5229-92 recommends that HALT should only be conducted up to 25°C below Tg.

There are many situations where the sampling of material for discrete tests is inappropriate and non-destructive examination is preferred.   An example would be the determination of the extent of damage in an impacted panel.   There are a number of techniques that can give clues in this context.

X-radiography (pictures from X-rays) does not yield good images of carbon-fibre composites because the density difference between the fibre and the resin matrix is small.   Glass fibre composites can be imaged more clearly.  Cracks running parallel to the X-ray beam will be clearly imaged in either material but are rare in composites.   Where there are surface-breaking cracks these can be imaged used penetrant-enhancement (e.g. silver iodide solution) but there may be concerns arising from composite-penetrant interactions.

Thermography:  The differences in heat flows in a material can be imaged using thermal/infrared cameras (as used by emergency rescue teams).   A delamination in a composite will act as a barrier to the passage of heat.  If viewed from the heated surface during a transient heating, the delaminated area will heat up more quickly than the surrounding area because of the broken thermal path to the other surface.  If heated from the opposite side, that area will heat up more slowly.

Ultrasound:   Sound can travel as compression waves in fluids and as compression (longitudinal) or shear (transverse) waves in solids.   The different terminologies come from engineering (physics).  To interrogate defects in composite materials, a high-frequency pulse (ultrasound) is input to the material and the returned signal analysed.   The trace of voltage against time is known as A-scan.  Surfaces and defects reflect or scatter the pulse and hence influence the peak amplitude of the returned signal.   By scanning the transducer in the x-y co-ordinates, a colour map of the attenuated signal strength against position can be built.   This display is known as C-scan.  For example, in the C-scan at Figure 2 light areas indicate a strong signal returned after passing through the plate in both directions while dark regions indicate high attenuation of the signal due to absorption and scattering (the instrumentation used stretches the image along the x-axis).

Figure 3:  Video frame of flow fronts during mould fill (left) and ultrasound C-scan of the same area from the cured laminate (right)

Vibration:   When an object is struck it will vibrate with a characteristic frequency and damping.   For example, a rail vehicle wheel will ring clear and long if it is defect free and sound dull and die quickly if there is a significant defect.   This is known as wheel-tap testing.  An alternative is to use less energy and excite a more discrete area.   This technique is known as coin tapping after the excitation source used.

Other NDT techniques exist, but they do not find such common usage in composites structures.

There are a number of thermal characterisation techniques:

Table 1: The role of the different thermal analysis techniques
(based on an unidentified supplier’s Thermal Analysis Application Guide)

Optical:  Optical microscopy is normally considered to have a diffraction-limited resolution at around 250 μm although flourescence-based techniques (normally for biological materials) can achieve in-plane resolution of ~20μm and axial resolution of ~30μm [48].  For optimum resolution in optical microscopy it is necessary to produce an accurate flat surface which will sit normal to the optical axis of the microscope.   Specimens are normally individually potted in an epoxy casting resin and (at the University of Plymouth) prepared using a Buehler 2000 Metpol grinder/polisher with Metlap fluid dispenser according to the procedure shown in Table 2.

Electron Microscopy:  For most practical purposes the resolution limit of the optical microscope is 1 μm.   To see finer detail, and to increase the depth of field, it is necessary to image in an electron microscope.   For fractographic studies, the scanning electron microscope (SEM) detects back-scattered electrons and forms the image from that signal.   For detailed material characterisation the transmission electron microscope (TEM) may be used but this technique is rare in the analysis of polymer composite materials.   Images of unprepared specimens can be taken from low-vacuum SEMs, but for high magnification (which may be able to image individual atoms) it is usually necessary to achieve high vacuum levels. 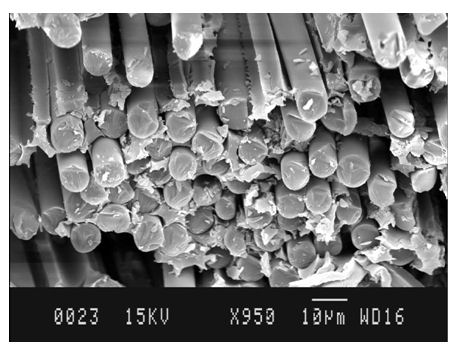 Work in progress!  In 1928, Raman discovered that a small proprtion of light undergoes inelastic scattering in the medium with which it interacts with a change in wavelength (now known as the Raman effect).  However, the technological development of efficient Raman spectroscopy systems was not implemented until lasers became available [68].  The technique observes vibrational, rotational and other low-frequency modes in chemicals to provide a structural fingerprint by which molecules can be identified.  The bond vibration must produce a change in the polarisability of the molecule to be Raman active, so the technique is complementary to infrared spectroscopy.  Entities with strong Raman responses tend to have weak IR responses and vice versa.